The Natural Contract and other encounters with Serres

Our unique reactions to the same piece of writing can vary widely. If you've found your way here there is a reasonably high probability that you're interested in what Michel Serres has written and said. I think, however, that he would be less interested that you are interested in him, per se, and much more intrigued by the interplay of ideas that he has spun from the stock of his life and work.

I asked Randolph Burkes, a translator of Serres's work, about what aspects of The Natural Contract he found particularly engaging. Here's what he said:

"The Natural Contract was one of the first things I read by Serres, after the Descartes and Fontaine essay. Always interesting, if a bit short on practical steps to be taken. I particularly remember being struck by the scene with the lovers throwing the apple back and forth from boat to shore. Don't know if you've gotten that far yet. American environmental ethics was far ahead of Serres on this point, if lacking his elegance. See for instance, the legal arguments of Should Trees have Standing?, by Chrisopher Stone, from 1972."

A small fragment, an impression, a vignette amid a flow of images. At whatever point you may be reading this, I would welcome your reactions to something Serres has written. Our experiences of others fuels the conversations we are very much in need of. Perhaps these small eddies of thought can in turn inspire still others.
Posted by Ingenuity Arts at 12:05 PM No comments:

There are many images, stories, and reflection in The Natural Contract that are worth noting and that I find challenging, inspiring, and morbid. One passage  that is for me a powerful Serres sketch was not easily reducible (nor should be) and yet I wanted to display it in some way. I had an old $5 garage sale painting with gilded frame that has hung around my work space for years and I decided to do a fully tile-printed version of the quote. I stained the paper, applied it with wallpaper paste, re-assembled the frame, and then hung it back up. It measures 30 inches by 58 inches. It is a personal statement borrowed from a master. 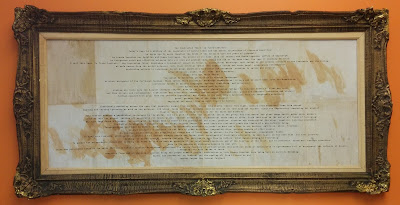 "Today's Sage is a mixture of the Legislator of heroic times and the modern titleholder of rigorous knowledge; he knows how to weave together the truth of the sciences with the peace of judgment;
he blends together our Egyptian and Roman heritages, the source of our laws, with our Semitic and Greek legacies, givers of knowledge; he integrates quick and effective sciences into our slow and prudent laws. Young and old at the same time, the Sage is reaching maturity.

I call this Sage "Ie Tiers-Instruit," the Instructed Third, knowledge's troubadour: expert in formal or experimental knowledge, well-versed in the natural sciences of the inanimate and the living;
at safe remove from the social sciences, with their critical rather than organic truths and their banal, commonplace information; preferring actions to relations, direct human experience to surveys and documents, traveler in nature and society; lover of rivers, sands, winds, seas, and mountains;
walker over the whole Earth; fascinated by different gestures as by diverse landscapes;
solitary navigator of the Northwest Passage, those waters where scientific knowledge communicates, in rare and delicate ways, with the humanities; conversely versed in ancient languages, mythical traditions, and religions; free spirit and damned good fellow; sinking his roots into the deepest cultural compost, down to the tectonic plates buried furthest in the dark memory of flesh and verb;
and thus archaic and contemporary, traditional and futuristic, humanist and scientist, fast and slow, green and seasoned, audacious and prudent; further removed from power than any possible legislator, and closer to the multitude's ignorance than any imaginable scientist; great, perhaps, but of the common people; empirical but exact, fine as silk, coarse as canvas; ceaselessly wandering across the span that separates hunger from surfeit, misery from wealth, shadow from light, mastery from servitude, home from abroad; knowing and valuing ignorance as much as the sciences, old wives' tales more than concepts, laws as well as non-law; monk and vagrant, alone and vagabonding, wandering but stable; finally, above all, burning with love for the Earth and humanity.

This mixture demands a paradoxical rootedness in the global: not in a plot of earth, but on Earth, not in the group, but everywhere; the plant image hardly makes sense anymore. Since we left the ground, casting off powerfully for remote places, we have relied more on immaterial bonds than on roots. Could this then be the end of all forms of belonging? May this Sage found a lineage. The rearing of the human baby is based on two principles: the first, positive, concerns his instruction; the other, negative, involves education. The latter forms prudent judgment and the former valiant reason. We must learn our finitude: reach the limits of a non-infinite being. Necessarily we will have to suffer, from illnesses, unforeseeable accidents or lacks; we must set a term to our desires, ambitions, wills, freedoms. We must prepare our solitude, in the face of great decisions, responsibilities, growing numbers of other people; in the face of the world, the fragility of things and of loved ones to protect, in the face of happiness, unhappiness, death.

To deny this finitude, starting in childhood, is to nurture unhappy people and foster their resentment of inevitable adversity. We must learn, at the same time, our true infinity. Nothing, or almost nothing, resists training. The body can do more than we believe, intelligence adapts to everything.

To awaken the unquenchable thirst for learning, in order to live as much as possible of the total human experience and of the beauties of the world, and to persevere, sometimes, through invention:
this is the meaning of equipping someone to cast off. These two principles laugh at the paths that guide today's contrary educational practices: the narrow finitude of an instruction that produces obedient specialists or ignoramuses full of arrogance; the infinity of desire, drugging tiny soft larvae to death.

Education forms and strengthens a prudent being who judges himself finite; instruction by true reason launches this being into an infinite becoming. Earth, the foundation, is limited; yet the casting off from it knows no end."

Posted by Ingenuity Arts at 6:23 AM No comments:

Randolph Burks has sent a note to say that he has completed the translation of three short stories by Michel Serres and posted them on Issuu. You'll see links to them below.

The Underside of the Landscape
http://issuu.com/randisi/docs/the_underside_of_the_landscape
PDF 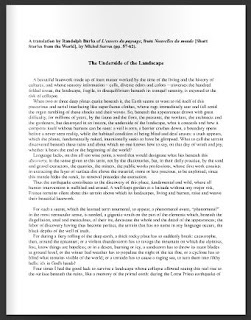 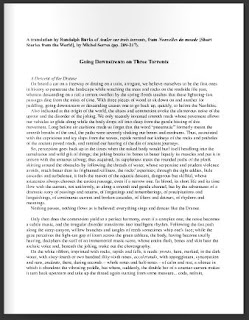 Gale from Due North
http://issuu.com/randisi/docs/gale_from_due_north
PDF 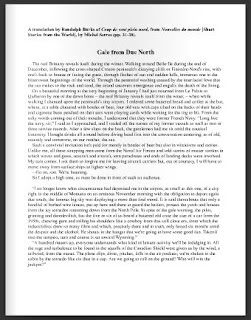 Posted by Ingenuity Arts at 7:43 AM No comments:

Education is not a commodity, is not reducible

Fall is the usual time for re-considerations of education. January, though, is perhaps an even beter time as a kind of mid-point in the year. The shine is off the apple but there is a solid stretch of work still ahead. With our memories tuned to a recently sorted out teachers strike (here in Ontario at least), musings about school means high hopes and excitement for some teachers and students, dread and weariness for others as they encounter a system that feels like it was designed for something alien, an administrative monstrosity that seems designed to prevent education rather than to enable learning. For reflections on education that get past backpacks and school supplies, this post from 2011 is  worth reading. The selection below will give you a sense of how Serres is woven into the narrative.

"To illustrate the importance of knowledge sharing, I would like to tell you a little lesson in economics: I have a block of butter, and you have three Euros. If we proceed to do a transaction, you will, in the end, have a block of butter, and I will have three Euros. We are dealing with a zero sum game: nothing happens from this exchange. But in the exchange of knowledge, during teaching, the game is not one of zero sum as more parties profit from the exchange: if you know a theorem and teach it to me, at the end of the exchange, we both know it. In this knowledge exchange there is no equilibrium at all, but a terrific growth which economics does not know. Teachings are the bearers of an unbelievable treasure – knowledge – which multiplies and is the treasure of all humanity.” (Michel Serres)
Posted by Ingenuity Arts at 6:10 AM No comments: